Richard Hawkins had his beginnings in IBM London prior to joining Avis. This shift in career has shaped the course of his lifelong involvement in the car rental industry. His first promotion to the International Audit Team is one of the many that he will see throughout his career, a testament to his strength in the field. He spent a few good years auditing the Avis offices across Europe, which also helped pave the way for Hawkins to learn the trade from an insider’s perspective.

As time progressed, it dawned upon him that the car rental business holds the key to take him places and experience things that he would never have imagined. It wasn’t just an average job that required him to be stationed at one location doing the same thing. The vibrancy of the industry and the many prospects it held excited him as he continued to audit and learn the business for the next 2 years.

During a casual conversation with a colleague, he stumbled upon a job opportunity in Asia upon the colleague’s recommendation. 6 months later, he was offered a role which he took without hesitation. Soon, he embarked on the next level of his career, this time in Southeast Asia as the Financial Controller of Singapore and Malaysia. After realizing his potential in the business, the company soon brought him to places like the Pacific Islands and Indian Ocean Islands to support their growth in these locations.

Years later, when his colleague offered a role as the General Manager in Malaysia, he seized the chance to advance his career. The 5 years spent in Malaysia proved to be a crucial turning point for him. He was promoted to take over the Regional Manager for Avis Asia. He also kept his role as the Managing Director of Malaysia and also the General Manager of Singapore – making it a grand total of three very important senior executive positions to helm!

He continued to wear the many hats in the company until he grew restless and desired to achieve greater things. He yearned for more than just corporate stability and wanted a business that he could call his own. After years of toiling in the car rental industry, he had the ambition to start his own car rental company that was based in Asia rather than just acquiring a foreign franchise. During his tenure in the company, he met Felix Fernandez and David Chen, industry veterans and valuable partners who would eventually play a pivotal role in establishing the business.

Sensing that the timing was ripe, Hawkins founded “Hawk Rent A Car” in 1994 together with his partners. The business name derives inspiration from his surname. The leap of faith has proved worthy as the team successfully established Hawk Rent A Car as a key player in the Malaysian, Singaporean and Hong Kong car rental market.

Hawkins is also a proud member of Skal, the only professional organization promoting global tourism and friendship. He was elected to the Post of International President for 1999/2000 at the International Congress held in Stuttgart, Germany. 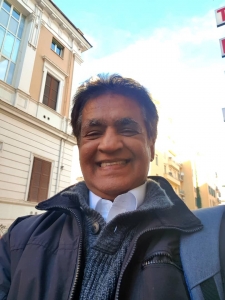 Felix had his beginnings in the managerial world after enrolling in a business administration programme. From there, he joined the government service. After working briefly as a civil servant, Fernandez believed that he could achieve greater things in a different industry. When he saw an opening for an entry level role in Avis, he seized the opportunity. This marked the pivotal beginning of a lifelong career in the car rental industry.

After joining the industry, Fernandez saw great opportunities to grow his career and expand his horizons. He worked hard to make a mark for himself and his efforts didn’t go unnoticed. Within a mere 6 months, Fernandez was promoted and subsequently posted to the Kuantan office. He loved a good challenge, and spent his 1-year stint in the East Coast office honing his skills. He was eventually transferred back to Kuala Lumpur before a promotion came in the form of a branch manager role in Penang. A city renowned as the Pearl of the Orient, this positive transitional growth to an important Malaysian market is a testament to his skills in the field.

After serving the Penang market for 5 years, Fernandez came back to the headquarters in Kuala Lumpur once more, this time to lead as the Country Sales Manager. He yearned for more and opportunity came when he met Richard Hawkins. Impressed with Fernandez’ resilient attitude, Hawkins brought him onboard as part of the founding members that established Hawk Rent A Car in 1994.

His determination to offer excellent service to his customers has earned him a loyal and wide network of contacts. Having lived in the major cities in Malaysia has enabled him to gain a thorough understanding of the nation. These attributes are integral to the growth of Hawk in the early years.

In retrospect, Fernandez’ determination to complete his education and pursue a career in the car rental industry has paid off greatly. As a man who enjoys traveling and meeting new people, his career has brought him far and wide. Hawk Rent A Car continues to offer this experience till this very day. Today, Fernandez continues to enjoy a rewarding stint in the industry. He is now leading the Malaysian division of Hawk Rent A Car together with his associates.

Since 2009, Fernandez has been serving as the President of the Car Rental Association of Malaysia (CRAM). His initiatives have helped forward the association’s corporate aim is to achieve recognition for the industry, and to work with the members in solving the problems of the industry. Fernandez is also serving the Malaysia Tourism Council as an Auditor since 2015.